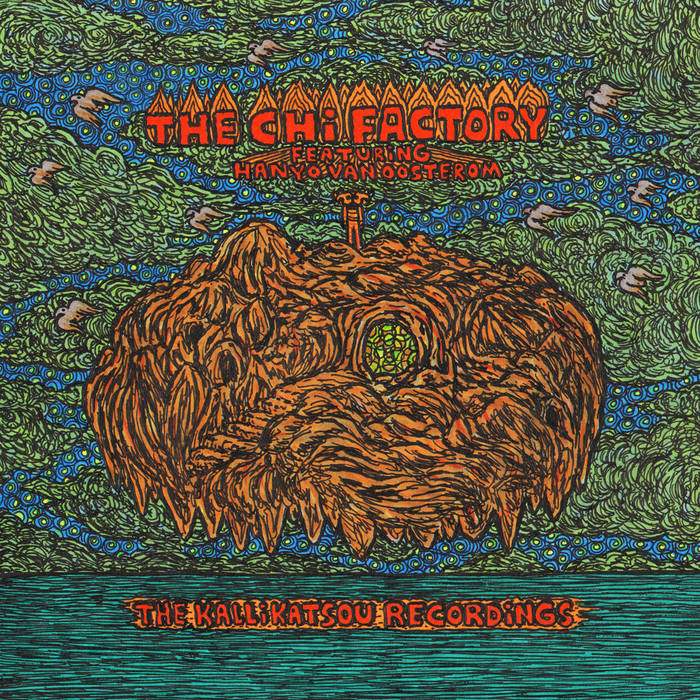 Hanyo van Oosterom lived in the small cave of the Kallikatsou in the early eighties, finding inspiration there for the Chi project (1983-1986). From the nineties to 2006 he created drones, loops, samples and soundscapes, traveling numerous times annually back and forth to the Kallikatsou for fine-tuning. With the Original Recordings and Bamboo Recordings, both strongly connected to the Kallikatsou, creating the perfect timeframe, “the circle [is] closed. Together these recordings reflect and express the different aspects of the experience. A trilogy of random dream-catching over 30 years.”

Juno Records:
Last year, Astral Industries released The Bamboo Recordings, a sublime, non-stop ambient voyage from obscure Dutch outfit The Chi Factory based around recordings Hanyo van Oosterom made while living in a cave on the Greek island of Palmos in the early 1980s. This follow-up contains sounds, textures and musical elements recording during the same period, which van Oosterom has been tinkering with, on and off, since the early '90s.

Like its predecessor, The Kallikatsou Recordings - named in tribute to the "sacred mountain" the producer lived beneath on Palmos - joins the dots between Eno style ambience, Stockhausen style sound collage, the sample-heavy brilliance of The KLF's Chill Out, the humidity of Finis Africae, and contemporary drone productions. If anything, it's even better than the previous ecordings.

After revisiting Kim Cascone’s sublime Heavenly Music Corporation project, London label Astral Industries return to scratch their archival Chi itch one more time. ‘The Kallikatsou Recordings’ is the second collection of music from the period prior to Hanyo van Oosterom and Jacobus Derwort forming the Chi project. Like last year’s ‘Bamboo Recordings’, inspiration comes from van Oosterom’s extended visits to the Greek island of Patmos where he developed a deeply personal connection with a mythical rock structure called the Kallikatsou.

This previously-unreleased collection comes from music van Oosterom worked on over several years from the nineties onwards, drawing peace of mind from the Kallikatsou and channeling it into drones, soundscapes, samples and field recordings. Collated together as two long form pieces rich in deeply-textured ambience, van Oosterom orchestrates a half hour journey through becalming, evocative waters that represent a fitting finale to the Chi archival saga.

Bleep:
Chi Factory founding member Hanyo van Oosterom spent some time living in the Kallikatsou caves of the Aegean Islands back in the 80s, a time purportedly spent gathering inspiration for his visionary fourth world music. He went back and forth during the 90s and early 2000s gathering field recordings and creating loops and drones, all of which come together on this special album for Astral Industries. Two side long excursions laying bare the Dutch musicians creative process and totaling almost 45 minutes of unique experimental and ‘organic’ soundscapes. If The Kallikatsou Recordings are anything like the previous Chi Factory releases on AI then we can safely say that these will encourage repeated listening sessions.

Norman Records:
The name The Chi Factory suggests an industrial production line for music, but in fact, all the work done on The Kallikatsou Recordings took part in a remote cave. The two side-long suites presented here are deep, droning soundscapes that bear the weight of their age (this project has been active since 1983) beautifully. LP release on Astral Industries.

Sounds Of The Universe:
Electronic experiments from Dutch musician, Hanyo van Oosterom who is the mastermind behind these deeply mediative, expansive recordings

Technique Japan:
Ambient recommendation! From the label Astral Industries, which is drawing a lot of attention as a unique release, a new album released by The Chi Factory, a visionary project modified by Hanyo van Oosterom of the Netherlands that was active in the 1980's! It produces a sound world like a sound track where the ambient electronic sound overlaps with a fantastic mood! We have completed a very sophisticated album created from many years of career!