Red Lantern At The Kallikatsou 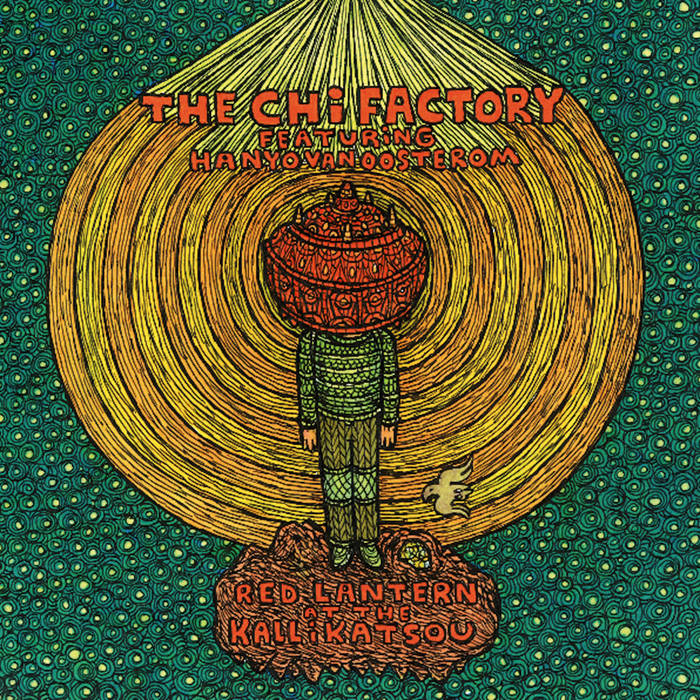 "I’ve never met Rod Modell (Deepchord) in person, but we have met through music. He found an obscure cassette of Chi music (from ’86), sent it to Astral Industries and paved the way for the release (30 years later) of ‘The Original Recordings’ in 2016. Since then, we’ve exchanged ideas and good music. I sent Rod a preview of ‘The Kallikatsou Recordings’ - he really liked it - and here came the idea for a remix of ‘Lanterns’. I started working on some random, lo-fi samples from Youtube, using Audacity, perhaps the simplest way of producing loops and samples. It’s the only computer based system that feels like the tape recorders I used to work with.

I sent the first sketches to Rod on Facebook, but they ended up in the wrong inbox. I forgot about them, but months later he came back saying he loved them. I decided to go back to working on them, maintaining the lo-fi approach. I began manipulating the samples: time-stretching, tempo and pitch-shifting, mixing different layers and adding old-school monophonic “old speaker” effects, delays and loops. I used a few field recordings, voices and samples from my early ambient cassettes, and they matched. Ario from Astral Industries got involved and the experiment turned into a plan - a vinyl release - ‘Red Lantern at the Kallkatsou’”.
Hanyo van Oosterom
credits
released December 12, 2017

Just out on limited vinyl at Astral Industries/Rubadub (UK) and only a few copies left :) Sounds like: www.youtube.com/watch?v=verolqcpzRA See also the first reviews:

Chi Factory have taken Deepchords first AI release and submerged it into their lusciously saturated, morphing spheres in inimitable style. Very beautiful stuff, and at 21mins per side, you are getting the full experience with this disc. (Rewind, Forward)

Red Lantern at the Kallikatsou combines age old cassette rips with modern day YouTube samples chopped up on Audacity like it was a vintage tape recorder. The result is pretty invigorating; be sure not to miss this! (Bleep)

'Red Lantern at the Kallikatsou' is the wondrous result of audio unearthing, processing and augmenting, building on a mysterious cassette tape from 1986. Coming into existence under The Chi Factory, this release is a heady ambient brew, evoking Thomas Köner and FSOL's slowest and calmest moments. (Norman Records)

Over two seamlessly sequenced sides the founding member of Dutch experimenters Chi reenvisions Rod Modell's 'Lanterns' thru the prism of modern software, sieving their spectral airs for etheric loops and vibes which he layers into a cats cradle of soothing, tranquil atmospheres, but reserving some surprise twists to points when soothed heads may least expect it. (Boomkat)

Two epic ambient journeys from an underrated hero of the underground. Van Oosterom is said to have used lo-fi approach on these tracks: manipulating the samples, time-stretching, tempo and pitch-shifting, mixing different layers and using effects in addition to field recordings, voices and samples from his early cassettes. (Juno Records)

Residents of nostalgia that picked up self-consciousness to be buried in the inner world, and production from the abyss of the world. This is a jackpot. As the mother regression, the best music that creatively spreads like a dreamlike sound wrapped in sacred warmth and hidden floating feeling in the womb. Without hearing this, 2017 will not end like it will end. One thing !!!!!! (Meditation Japan)

Our utopian space music favorites The Chi Factory are back with 'Red Lantern at the Kallikatsou'. The results are completely deep, delicate, aquatic, reverberating, and textured ambient music that engulfs the listener. You will need SCUBA equipment for this one! Stunning. (Amoeba Hollywood)

Deepchord's seminal "Red Lantern", taken from the very first release from the Astral Industries label, gets an epic ambient/chillout remix by THE CHI Factory on this "Red Lantern At The Kallikatsou" (Groove Distribution)

Hanyo van Oosterom’s (aka Chi Factory) Red Lantern at the Kallikatsou is a remix of DeepChord’s Lanterns and was released on Astral Industries on the 12th December, 2017.

Red Lantern at The Kallikatsou presents two 21 minute pieces filled with amorphous chambers soaked with history and emotion. They are set in worlds that hold the grandeur of lost civilisations - where only ruinous structures remain and haunted dissonance echoes eternally.

The record begins with water depicted figuratively, layered with indistinct speech and field recordings, before being enveloped by more mystical overtones that establish a theme that continues throughout. Over the course of the record the liquid becomes thicker - we hear cascades, dripping voids, eruptions, distant tides, reverberant rivers, still pools and at its end we experience full submersion.

Each of these moments are articulated through impressionism, enhanced by synths and slow rhythms that the record is imbued with. The varying forms of water symbolically represent the power play between light and dark - a metaphor for the fragility in which life hangs, and its ability to transform between peace and chaos at any moment.

Sonically, the record employs a vast array of low fidelity YouTube samples, cassette recordings and pitch-shifted audio. The combination of these sounds, coupled with the complex layers, give a translucent quality in which the listener can hear elements that disintegrate in slow motion as something new emerges in its place. The soft distortion and distressed artefacts suggest a vulnerability within the balance of the component parts that, over time, depict a tension and unease as more somber and dissonant sounds appear.

Real beauty is both complex and simple at the same time. Witnessing beauty appear amongst distress substantiates its truth, meaning that we can more greatly appreciate its presence. AG (Cultural Bulletin)

Two more extraordinary excursions into deepest dub coma from Chi, aka Hanyo van Oosterom, and something of a missing link between Detroit techno and UK DIY (!). It was Rod Modell's (Deepchord) discovery of an obscure old Chi Factory cassette that led Astral Industries to release The Original Recordings (2016) as well as the previously unreleasedThe Bamboo Recordings (2016) and The Kalikatsou Recordings (2017).

Here, van Oosterom pays tribute to Modell with two sprawling remixes of Deepchord's 'Red Lantern' (from AI-01, released 2014, and currently being listed by some bastard for £222 on Discogs). These radiant dronescapes are more amorphous and ambient with a capital 'A' than anything on Bamboo or Kalilkatsou, and share something with Modell's own Waveform Transmission material (see one of our favourite albums of 2017), Reinhard Voigt's underrated Sturm project, zoviet*france's smacked-out Just An Illusion and even Foxx/Budd's drowned-world instrumentals.

Its lush, bleary, amniotic ooze was apparently achieved by the most lo-fi of means, working from YouTube clips rather than original masters and manipulating them with Audacity ("the only computer based system that feels like the tape recorders I used to work with," he says), time-stretching and pitch-shifting, mixing different layers and adding old-school monophonic “old speaker” effects, delays and loops, including field recordings, voices and samples from his own early ambient cassettes.